In a span of four working seasons, around 1,000 workers, including 123 soldiers were deployed to reduce the water level of the Lake which was posing a catastrophe in the making

The last spade of debris was cleared and the last blocks of boulders were removed. As the men dusted their worn-down boots and packed their bags to go their own separate ways, they all had one common feeling- they were leaving behind a tamed lake that once challenged to take thousands of lives and cause colossal destruction downstream.
The Job was done. Some 4500meters above sea level the 1,000 Bhutanese workers successfully reduced the water level of the most dangerous glacial lake in Bhutan by 5 meters, the end to a set target five-year project.
Downstream, Punakha valley breathed a sigh of relief. The valley had already seen a Glacial Lake Outburst Flood (GLOF) in 1994 which claimed 20 lives and caused irreparable damages to infrastructure and livestock.
The destruction of the GLOF this time, if untamed, would have been three times more.
The Project Manager of the lake mitigation project, Dowchu Drukpa, said it has been a hard five year period with every year bringing new challenges and difficulties.
Among others, difficulties the workers faced include heavy rain falls, heavy snow cover, massive landslides, cold weather and road blockages.
He said the achievement of the project is expected to reduce the extent of damage downstream in the event of an unforeseen glacial lake outburst.
“Despite the unpredictable weather conditions and challenges of working in a remote high altitude and inhospitable work environment, we have managed to reduce the water level of the lake by the set target over a period of 4 working seasons,” said Dowchu Drukpa.
He said, with the total water level reduced by 5meters, it is estimated that the total volume of water released is 17mn cubic meters, almost equal to the volume of water discharged by the 1994 GLOF of 18mn cubic meters.
“The volume of water released in the span of four working seasons is equal to the 1994 outburst and this means we have released a lot,” said Dowchu Drukpa.
It took about 300 workers each working season to successfully lower the water level of the lake. Each year the workers had 2-3 months of manual working season. Workers had to work from 8 am to 4 pm everyday.
“Every year we had different workers but there were some who worked for two seasons also,” said Dowchu Drukpa. 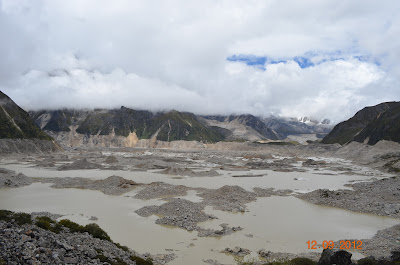 The project to artificially reduce the water level of Thorthormi Lake began in 2008.
The initial year of the project started with technical assessment of the site and only by the second year some 300 workers were recruited.
During the first year of the working season in 2009, workers were able to reduce the water level by 87 centimeters while in the following years water levels were lowered by 1.3 meters and 1.45 meters respectively.
“The initial working season was tough because as it was the start of the project and there were many things to be done,” Dowchu Drukpa said.
With a total of 3.68 meters achieved by the third year, 1.32 meters were left for the workers to complete the whole project.
This year, with support from the Royal Bhutan Army (RBA), around 123 soldiers helped reduce the water level and achieve the target of 5 meters although half the numbers of regular workers were in attendance. 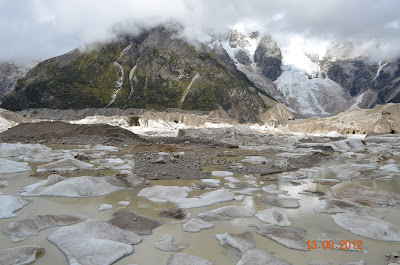 The job is done but it didn’t come without a cost.
In 2010, three men died in a span of four months due to altitude sickness and many more were hospitalized because of the working conditions.
The deaths raised a lot of questions on the safety of the workers. Subsequentlty the project management initiated various programs of which one was to set up transit medical camps at two different locations.
A transit medical camp was set up at 3,900 meters before the highest pass toward Lunana and the other was set up after the highest pass at around 4,100 meters.
“After the incident, lessons were learned and we did everything possible to make it safer for the workers,” Dowchu Drukpa said. He said a through medical check-up was carried out for all the workers before sending them up north. At the base camp they were further checked and were allowed to work only if found fit.
Dowchu Drukpa said even though the work is complete regular monitoring of the lake will continue as the debris may start to recollect and water levels may rise again.
A series of studies conducted by the Department of Geology and Mines, Ministry of Economic Affairs, in collaboration with international research institutes in the late 1990’s and early 2000, revealed that Thorthormi lake is among the most dangerous glacial lakes in the country.
The studies thus recommended for construction of a spillway channel to reduce GLOF threats for the lake. It was then that the artificial lowering of the lake was prioritized under the National Adaptation Program of Action (NAPA) with funding for the Least Developed Countries Fund/ Global Environment Facility and co-financing by the United Nations Development Program, Austrian Development Cooperation, World Wildlife Fund Bhutan and the Royal Government of Bhutan.
Thorthormi Lake is located in the headwater of Pho Chhu sub-basin at an altitude of around 4,428 meters above sea level in the remote Lunana area of northern Bhutan. The lake poses the most pertinent GLOF threat and in the event of an outburst has a potential to cause unprecedented damage to the valleys of Pho Chhu and Punatsang Chhu.
Posted by Dawa T Wangchuk at 12:24 PM

Dawa T Wangchuk
I am a reporter working for Business Bhutan. I write about environment and climate change related issues.Here are some of my works published in Business Bhutan. I started my career as a journalist in August 2008 in Bhutan's first daily paper. I have a degree in B.A (Journalism and Psychology).